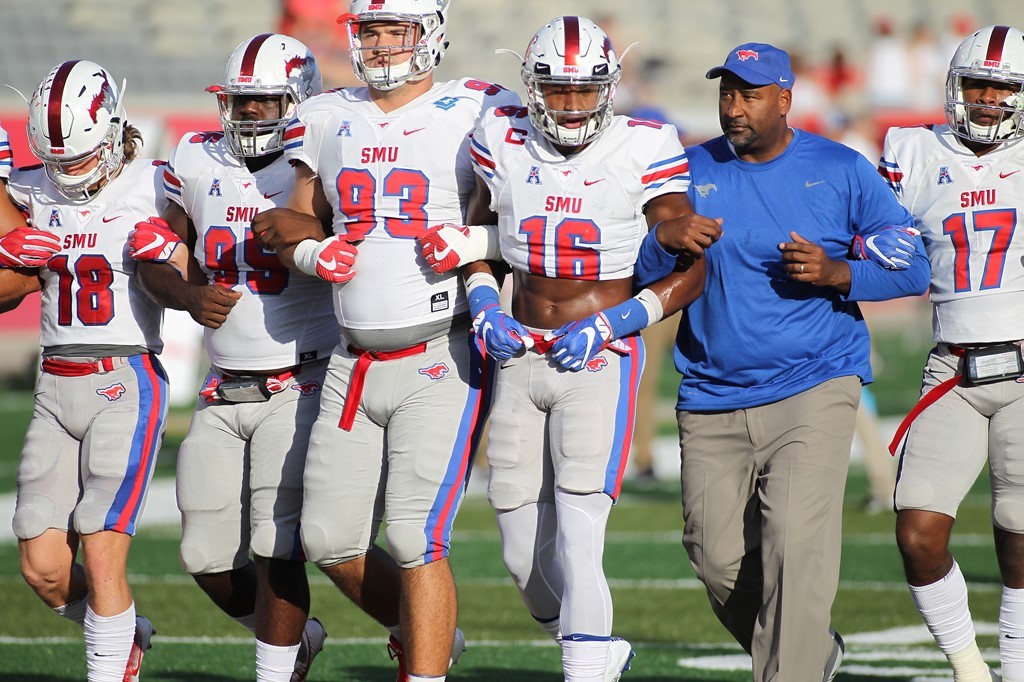 Last week, in so many words Chad Morris called his team’s response against Connecticut a pivotal moment in his programs journey to prominence.

On Saturday night, the 4-1 Mustangs took the field of Houston’s relatively new TDECU Stadium. For SMU, the opportunity to beat Houston and establish themselves as a title contender for the American loomed in the distance – and when the final whistle blew that evening, just shortly after Ben Hicks had thrown his second interception in less than five minutes, the Mustangs walked off the field defeated.

After losing to Houston 35-22, the 4-2 Mustangs bye week could not come at a better time.

Ben Hicks and company got off to a quick start on Saturday night against Houston. Both teams were aggressive out of the gate. Offensively, SMU seemed to focus on the pass game. What appeared to be a good strategy for the Mustangs (Hicks was 11-14 for 100 yards and a TD in the 1st Q) ended up being 58 pass attempts for Hicks.

“We threw the ball entirely too many times. The game, the score, given the situation we had to do that.” Chad Morris said. “It’s very out of balance for us, we want to be as balanced as possible.”

Even though Hicks completed 41-58 for 397 yards and 1 touchdown, the sophomore threw two costly interceptions in the final minutes of the 4th quarter to seal Houston’s victory.

However, despite the ‘Stangs offensive barrage they struggled to find the end-zone. What was once the most reliable red-zone offense in the country was suddenly nowhere to be found. Including the final 10 seconds of the first half that saw the Ponies with a first and goal from the 6 yard line. The result was a missed Josh Williams field goal.

Once again Chad Morris found himself standing on a precipice wondering how would his team respond?

Unlike the game against Connecticut, SMU struggled to rally. After holding Connecticut to -8 yards rushing, the once reliable run defense of SMU struggled to tackle and fill the seems in front of a Houston offense that had not been defined as a running team. Houston running back Duka Catalon finished the game with 177 rushing yards, a career most and 2 touchdowns, his first multi touchdown game of his career.

Throughout the game Houston focused on Jordan Wyatt, targeting the receivers he lined up against.

Coming back from a shoulder injury Wyatt looked his normal self containing and tackling. But he was called for two pass interference calls and seemed about half a step behind his normal speed in coverage.

However, Wyatt has continued to show off his speed and ability to track down the ball behind the play.

Jordan Wyatt like a freaking cheetah out of nowhere to save the TD for #SMU. 45 yard gain for Houston and another big momentum shift.

With a huge momentum shift coming off of an SMU turnover Houston looked poised to score a TD on a 45 yard run by Duke Catalon when Wyatt emerged out of nowhere to save the TD. Houston would eventually score on that drive however.

To add to SMU’s defensive struggles Cedric Lancaster remained sidelined, despite reports that he would play, and safety Rodney Clemons left the game with an ankle injury. He is expected to return against Cincinnati.

Despite coming into the game scoring points in every quarter, SMU did not score in the 4th and with time running out the Mustangs were forced to rely desperately on the pass game in the final minutes.

The Mustangs will travel to Cincinnati October 21, to take on the Bearcats.