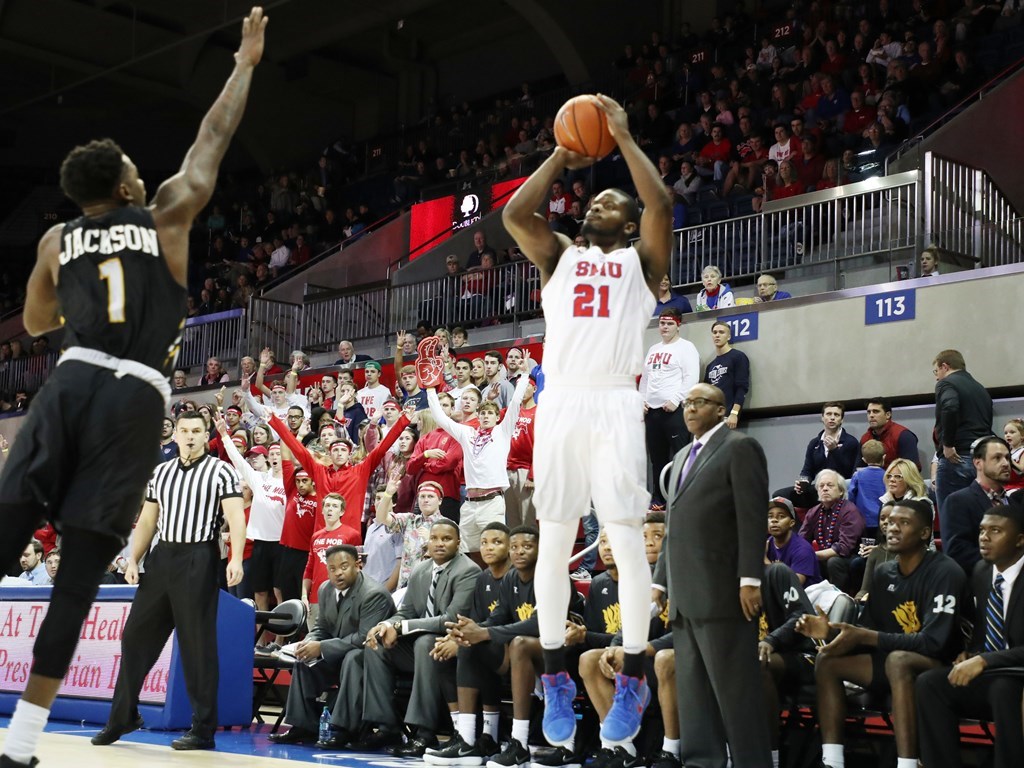 Players fell to the floor, the ball was everywhere – it was a scramble literally. That or a game a hot potato. Either way, the mayhem that was displayed for 15 seconds during SMU’s first half against University of Arkansas – Pine Bluff was an accurate depiction of SMU’s start to the season.

SMU struggled during their home opener against the University of Maryland Baltimore County. Despite winning 78-67, the Mustangs had several questions that went unanswered. Would the defense improve? Could anyone other than Shake Milton be relied on to score the basketball? Which of the freshman would standout and be reliable?

Just two days later the Mustangs struggled again, despite rallying in the second half to win 83-65, the Mustangs first half struggles continued. Freshman Ethan Chargois showed to be a huge positive for the Mustangs. Chargois averaged a double double through the first two games and showed of his able to shoot reliably from three point range. However, SMU’s three point defense still had holes, foul trouble plagued the Mustangs, and rebounding was an issue.

The game against Northwestern State however was a different story. Although quality of opponent may have played a role, the Mustangs finally found their groove. Holding the Demons to 8 points in the first half, SMU took a commanding lead going into halftime.

Jarrey Foster finally filled into his role for SMU as the do it all athlete and exploded in the first half. With 12:52 left in the first half the Mustangs went on an 11-0 run to take a commanding 21-6 lead. Over the final 12:21 SMU would outscore NSU 23-2 to take a 36-8 lead at halftime.

On a night where everything went wrong for NSU, nothing could go wrong for the Mustangs. The Mustangs stampeded out of the half with a barrage of three pointers led by senior Ben Emelogu. SMU would finish the game going 13-31 from three.

I would like to say that in two months we will look back on this game as the foundation of SMU’s success.

The junior pair of Shake Milton and Jarrey Foster have shown early this season that they will continue to be quite the pair. Foster and Milton are averaging 14 points and 21 points per game respectively.

After two efficient but quiet starts for SMU, Emelogu caught fire from deep in SMU’s third game against NSU. The 2016-17 American Athletic Conference Sixth Man of the Year nearly logged a double double against Northwestern, scoring 17 points and snagging 9 rebounds. One of only two seniors on the roster this year for the Mustangs, Emelogu’s role has shifted from do it all sixth man to starter and leader.

Emelogu continued that hot streak against UAPB scoring 13 points and snagging 10 rebounds for his first career double double. On the season “GUUUU” 12-20 shooting 60 percent from three. His ability to be consistent from deep will be key for the Mustangs.

For the first time this season SMU fans were treated to an offense and defensive performance that complimented each other in back to back games against Northwestern and UAPB.

While the Mustangs are young, offensively they caught fire, showing off a rotation of five players that can all shoot from deep. Jimmy Whitt has continued to take command of SMU’s offense. Whitt is averaging 6.5 assists per game.

With SMU’s 4-0 start to the season, the Mustangs Head Coach Tim Jankovich moved into second place on the NCAA’s list of best home starts at 29-0.